How Your Great-grandfather Won the War by Deb Weir

Did you know that your great-grandfather single-handedly brought the end to WWII? Well, he had a little help from the Hershey candy company.

Victory in Japan, or V-J Day, was 75 years ago. Great-grandfather was one of the youngest men in the U.S. Marines on that day of September 2, 1945. He joined the Marine Corps because of their reputation for tough training, and he knew that the experience would protect him in battle. He was too young, however, to experience active warfare; the fighting was over by the time he reached Pearl Harbor, Iwo Jima and Japan.

He fought a different battle; the fight to secure the peace. His weapon was Hershey bars.

Great grandpa was one of the first Americans in Nagasaki, Japan after the explosion of the second, more powerful, atomic bomb. It not only destroyed buildings but contaminated the food and water. The few surviving, and starving, Japanese feared that they would be tortured by the Americans, and so they hid. They hid their children, women, and weapons.

His job was to find those weapons and disarm the enemy. This was for two reasons: immediate self-preservation against the angry people and to prevent future wars. His orders were to change the culture that idolized the warrior class, the Samurai. He had to bring these terrified people out of hiding so he could confiscate their weapons. He was particularly ordered to collect their Samurai swords. These symbols of the 12th century culture were handed down from one generation to the next and given a place of honor in the home.

One day, while he was on patrol amid the wreckage, he felt a hunger pang. He reached into one of the many pockets in his cargo pants and took out a Hershey bar. Just as he was going to put it in his mouth, he had an idea. Instead of eating it, he put it on the remains of a house and let it soften in the sun. The aroma increased his hunger. It also attracted a ragged little Japanese boy who staggered up to the candy. The child looked at the conqueror, panicked, and ran away.

Your Great-grandfather exercised extreme self-control and left the chocolate alone. The child returned, scooped up the brown paste and disappeared into the rubble. More children appeared every time they saw a Hershey bar. Other Marines set out candy bars to entice more people out of hiding.

After a while, old men and women came after the candy. Then middle-aged people came out of hiding for the treats. Instead of the torture and abuse they had been trained to expect from this enemy, the Americans gave them sweets! The last to appear were the young women.

Marines bound up their wounds, gave them clean water and food and started the rebuilding of a peaceful Japanese nation.

When we buried your great-grandfather in Arlington National Cemetery, a young Marine knelt down below me to present the folded flag. He said, “It is men like your husband who made the U. S. Marines the most feared fighting force on the planet.”

Little did he know that your great-grandfather fought with a candy bar! 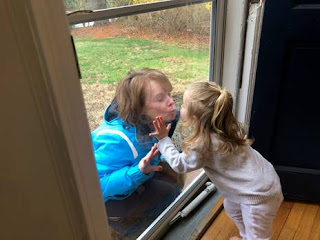